After slowly plodding through another white coated Estavian regiment last weekend, I could not face painting, so finished off some more mountain pieces I had knocked up during the week after work.

After looking at the previous mountains, I realised that for any table layout for those boxes on the Soldier King map where they feature (as a pass through the mountains - naturally fortified), I really needed some corner or edge pieces......

Several blogs including Blunders on the Danube, had a Snappy Nappy campaign featuring more "natural" shaped mountains which provided some inspiration for these: 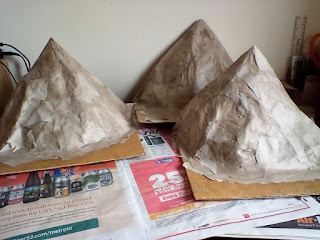 The rear face is flat designed for a table edge.

I intend covering them all in a mix of wall plaster, PVA and sand before adding a few rocks, grass and painting grey -brown (with snow capped peaks just for David).

It's odd where the hobby leads you; I've spend a few hours looking at the various artificial snow products available for convincing snow topped peaks!

After last weekend's complete inactivity, I was determined to do something hobby related. So Friday afternoon saw me sorting and cleanin...