Imagi-Nations a series of marathons and not a sprint?

I have been mulling over my Soldier King Imagi-Nations project recently. It's something that has consumed a lot of time and not inconsiderable amounts of the war chest.

Yet sometimes it feels as if it's no closer to completion. Much of the fault for this is my own; I could have limited myself to the four kingdoms of the boardgame, but instead opted to add other states and armies for the "neutral" provinces in the game , which of course involves more work.

However, this goes back to my first scribbling of ideas for uniforms. There was always going to be a white uniformed army. I still have drawings from the late 1990s showing white with multi-coloured facings. I think at first it may have been intended for one of the kingdoms but soon became the Imperial Estavian army.

Again, I could have limited myself to five armies; if I had it would be the final hurdle I was working towards. Alas, I have designs for between five to eight (depending on how you look at it) others after Estavia. Admittedly, two to four of these are of brigade size and the rest not much bigger. With the genie out of the bottle there's no going back without much regret, so I plod on.

This rumination prompted some thoughts about Imagi-Nations; I started back in around 1996 or 1997. Grant was the inspiration coupled with transferring SK to the tabletop. It evolved through a series of happy accidents; the publication of VnB; finding Schreiber card buildings still available; trying my hand at Fimo figures and so on.

Of course there was a popular fad which coined "Imagi-Nation" ; a short-lived creative and nostalgic period of popularity for the concept, firmly rooted in the mythical C18th. It is interesting to look back at something which generated myriad blogs, some of which lie moribund like forgotten Ruritanian states.....

It appears to me that there were three strands to the phenomenon; the overnight creation of a blog for the Grand Duchy of Krackpotia complete with uniforms of purple faced lime green. This was often accompanied by extensive back story, sort of fan fiction. Few figures were ever painted or armies fielded.

Others simply used their existing armies of historical nations and renamed them. A pragmatic solution which has ensured the survival of many Imagi-Nations. A variation is to create an army out of historical units, a pick-and-mix approach if you wish unrestricted by army lists and limitations. These have a pedigree in the armies of the Grants and Peter Young.

The rarest it seems is the fully fledged designed from scratch Imagi-Nation, complete with invented uniforms, flags and characters that actually reaches the point of figures and armies. They do exist. Some like mine created before it became popular. Their rarity due no doubt to the effort required.

My efforts have taken so long due to enthusiasm alternating between productivity and apathy. The number of moribund blogs testify to the difficulty in maintaining focus where so much depends on your creativity; there are no Ospreys which inspire and tell you what colour to paint another unit. No wonder many opted for easier pragmatic solutions. I have concluded that the creation of an Imagi-Nation (or more than one) is more akin to a series of marathons than a rapid sprint......

The last few days have seen me painting another unit for the Estavian Imperial army, interrupted by Britcon yesterday. This unit was a late ... 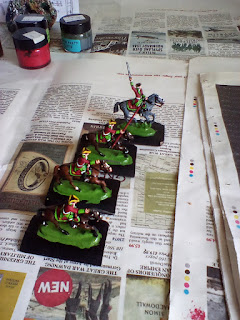